Time-Based Automations are part of Workflow Management, a set of Helpshift features which you can use to automatically manage large volumes of Issues quickly and effectively. To learn more about this set of features, please see our Workflow Management guide.

You can set Time-Based Automations to run on an updated Issue in a matter of days, hours, minutes, or seconds. To use minutes, you must already be using Queues. If you’re not using Queues, please review What are Queues, and how do I use them? and reach out to success@helpshift.com to learn how it can benefit your workflow.

Seconds can be unlocked with an account upgrade. Please reach out to success@helpshift.com.

To create a Time-Based Automation, proceed as follows: 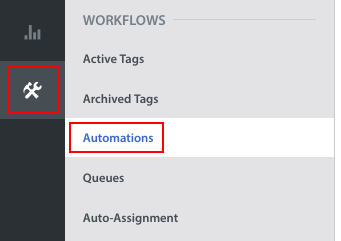 2. Select ‘Time-Based’ at the top of the page

4. In the ‘Create Automations’ pop-up, enter a title for your Automation, then select a time condition, filter(s) (the trigger for the Automation to run) and action(s) (what the Automation should do with open Issues that meet the criteria of the condition).

Time-Based Automations come with three time condition options, which are as follows:

Next, you’ll define the amount of time since that event has occurred which should trigger the Time-Based Automation. For example, if you’d like the Automation to run when it has been one hour since the Agent has replied to the Issue, you would define the time condition as follows:

Once the time condition has been selected, you can add additional filters. The filters available in Time-Based Automations are:

To revisit our example above, if we want to automatically respond to all Issues which have not received an Agent response after 1 hour and which are associated with payments, we may wish to filter based on the ‘payments’ tag.

Once you’ve defined all of your conditions, you’ll set the actions, which are the events that take place when the Time-Based Automation runs. You can select one of the following action types:

For the example above, we select ‘Reply to Customer’ and add a note we’d like sent as an Autoresponse. Also, you can use a Text Template to send a response in the Issue language.

You may also wish to assign it to a certain Queue or Agent to ensure it is addressed within the appropriate SLA. You can add additional actions by simply clicking ‘Add Action’ and defining the action to be added.

Our recommended naming convention is to include the condition and action in the title. For example, if this Automation is intended to add a private note to all open Issues that have received a new response from an Agent and which have the ‘payment’ tag, you may wish to title it something like Payments > No response by Agent after 1 hour > Follow-up re: delay in response. As you add more Automations, this naming convention is helpful for keeping track of them.

Once you’ve created several Time-Based Automations, you’ll be able to reorder them via the ‘Change Order’ button provided on the Automations page.

When you click this button, the list of Automations will update with drag-and-drop functionality and the ability to number each Automation to assign the correct order. 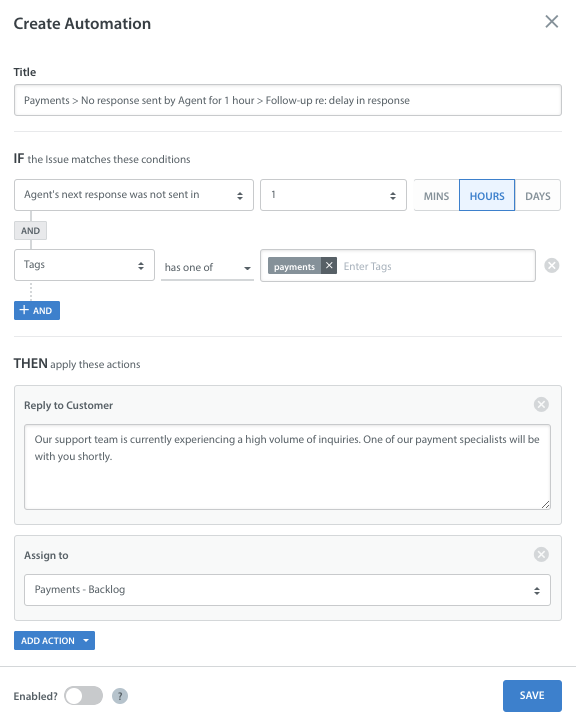 Saving without enabling allows you to review the Automation with your team first to prepare them for the impact the new Automation will have on their workflow.

You will now see it listed on the list of Automations, which also lists whether it is enabled or not.

When you’re ready to launch the Automation, switch the ‘Enabled?’ toggle to ON from the list of Automations (as seen above) or from within the ‘Edit Automation’ pop-up.

A toast will appear in the bottom left of your screen confirming the launch of the Automation.