The Issue Status is the the current state of an Issue. The following Issue statuses are available in Helpshift:

Once the Issue has been replied to and tagged (if applicable), Agents can change the status of the Issue. These statuses can be selected as parameters during creation or editing of a Smart View.

To change the status of an Issue, navigate to the Issue Detail page by clicking on the Issue. In the drop-down menu below your reply text field, Agents can choose to do one of the following:

Under the … icon at the bottom of the Issue pane, you have the option to Reject an Issue as well. 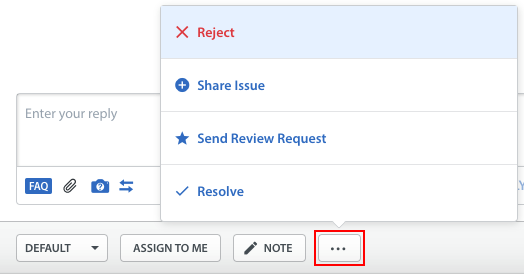 Reply via Email, or Reply (if an in-app Issue) will keep the Issue as open but will show it is replied to. This will now be in the ‘Agent replied’ status.

Reply and Resolve, or marking as Resolved under ‘Actions’, will close the Issue. It will now be in the ‘Agent Resolved’ status.

Note that if you type text and use the Resolve button on the far right, your text will not be sent. Please use Reply and Resolve if you want to reply to your user before closing the Issue.

Reject, in the drop-down under ‘Actions’, will mark the Issue as Rejected but there will be no effect to the end User; often used for Spam emails or messages. This Issue will now be in the ‘Agent Rejected’ status.

When your user replies to an already in-progress Issue, the Issue will revert to Waiting for Agent status.

6. When a new Issue is assigned, it will be ‘New Issue for Agent‘ status.